Did you know that a few years ago there was a food trend of making guacamole with avocado, smashed peas, and ginger? Apparently, it was a thing and garnered a lot of talk on Twitter. Now, Trader Joe’s is trying to tell us that guacamole with edamame is the new trending dip. Yup, they call it guacamame. Guacamole plus edamame equals guacamame. Get it? Would you eat it? (As a side note, did you know that there are restaurants putting rich, beautiful, decadent chocolate cakes into milkshakes and mashing it up for you to drink? But that is a whole other story. True, though.)

I know I’m old – or older – and I know what I like. I know I like a lot of traditional, or what I would categorize as classic, foods. I also know that sometimes, some things should not be messed with. Please don’t mess with my classic chocolate cake or my traditional spaghetti bolognese, and please don’t try and tell me to change that classic delicious guacamole dip. Keep it pure, filled with yummy avocado, onions, cilantro, salt, jalapenos, lime and maybe tomato.

I’m going to be honest here – I don’t make guacamole. Any party I go to, someone else is making it. Also, I happen to like the chunky guacamole they sell at Costco best. Shameful, I know, but I do. So I came into this with mixed feelings. 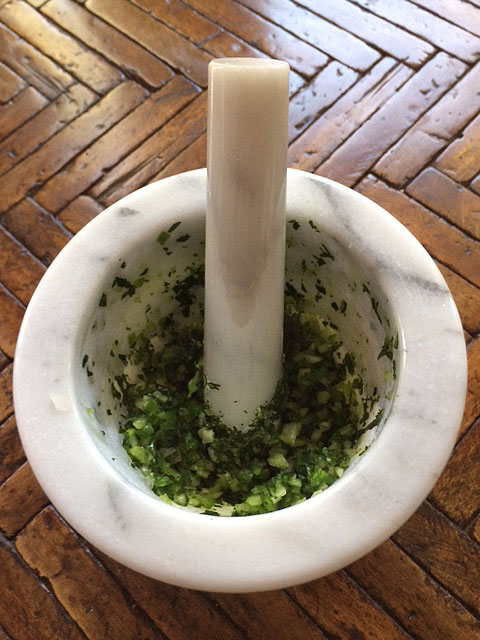 This recipe starts with making a paste of some of the ingredients. I dug out my mortar and pestle, which for some reason I just had to have a few years ago and then never touched – until today. You make the paste with the onion, chili pepper, salt and cilantro. You lightly mash the avocado – the genius trick being to keep it in chunks but just slightly soft. You want to still be able to see the chunks. Add more cilantro, and cut up avocado. Mash the avocado lightly and mix it all together gently, then serve. How much easier could it be? Super, super simple. It is very, very good but I like my classic version from Costco – it is creamier and smoother. The creator of this recipe, Roberto Santibañez, wants it to be “a textural thing.” He wants you to feel everything. For me, because of the texture, I like what they sell at Costco better. With this recipe, the only thing I could feel was the avocado and cilantro because the recipe tells me to make everything else into a paste. Which I did.

By the time I had this made, it was time to pick up the muppet, our golden doodle puppy, from his play date. I wrapped the guacamole up with some plastic wrap, hoping it wouldn’t brown before any of us could try it. The rest of the evening flew by and it got so late that after dinner no one wanted it. But when I came down the next morning, I noticed a dirty fork in the sink that looked like it had bits of guacamole on it. Hmmmm, I thought, did somebody eat the guacamole and not say anything? They even left their dirty fork in the sink! One thing was for certain, I knew it wasn’t me. I opened the refrigerator only to find that someone had eaten almost all of the guacamole and left almost nothing for anyone else – like maybe the person who made it. No one in this house has yet fessed up to the crime, but it must have been pretty darn tasty because there was just barely enough for one really good bite. My family all looks surprisingly suspicious to me.

Roberto Santibañez is a Mexican chef and cookbook author. He graduated with honors from Paris’ top culinary institutions, is a chef/owner of restaurants in New York, and, among other awards he has received, his cookbook Rosa’s New Mexican Table was nominated for a James Beard Award.

Did this make me a genius? Yup! I think it did. But I would make one change. I would take half the avocado and really mash it up to make it soft and creamy, then add the remaining chunks that were just lightly mashed.

The cost: $4.24. You can’t beat that – not even Costco can beat that. If I had been a really savvy shopper, I would have gone to a Mexican market where the avocados were $0.69 a piece instead of $1.25 a piece – but I opted for the closest local market.