I remember the first time I ever tasted banana bread. It was at The Plaza Hotel in New York City, and I was 10. My parents had taken us to New York for the weekend to see a new Broadway show – You’re A Goodman Charlie Brown. I felt as if it was a very grownup thing to do. We were having dinner in The Palm Court, a restaurant in The Plaza, another very grownup thing to do. I was just so pleased to be in this very fancy restaurant eating very late at night, and I was so impressed with all the fancy people dressed up all around me. Our waiter thought my sister looked just like Eloise, a girl who lived in the “room on the tippy-top floor” of The Plaza with her nanny, her pug dog Weenie, and her turtle Skipperdee. In the lobby of the hotel hung a portrait of Eloise, and sure enough if my sister didn’t look a lot like her. Because of that, our waiter would slip us a basket of this delicious banana bread before dinner (can you imagine dessert before dinner?) just to make us happy. And then again, when were were going back up to the room, he gave us another basket of banana bread. That began my life-long desire to find a recipe that was as good as theirs. As good as the one I remembered from that night, eating at The Palm Court, in New York City surrounded by fancy people, going to a Broadway show, and eating this delicious warm banana bread 50 years ago.

I was thrilled to find a banana bread recipe in my Genius Recipes cookbook. Add chocolate to the mix and that makes it even better. This recipe is called a banana cake – cake being the operative word. So what would this cake taste like? It looks like a banana bread. It has all the ingredients of a banana bread. I was intrigued.

The recipe calls for muscovado sugar instead of the white sugar most of us have used in banana bread – oops, I mean cake. Honestly, it is hard to call it a cake – it doesn’t look like one and it doesn’t taste like a cake. It is dense and chocolaty, maybe a little on the heavy side. It uses a surprisingly small amount of chocolate, yet the flavor was distributed so well there wasn’t one bite where you couldn’t taste that yumminess. The muscovado sugar is dark, very moist, and has a strong molasses/caramel taste. I really loved the difference in texture and taste that the muscovado sugar gave the bread/cake. I am going to try using what I have left in cookies and other desserts just to add that flavor. But it is expensive – $5.69 per pound. The recipe calls for a little over a cup, or 235 grams. That used up half of a very small package. 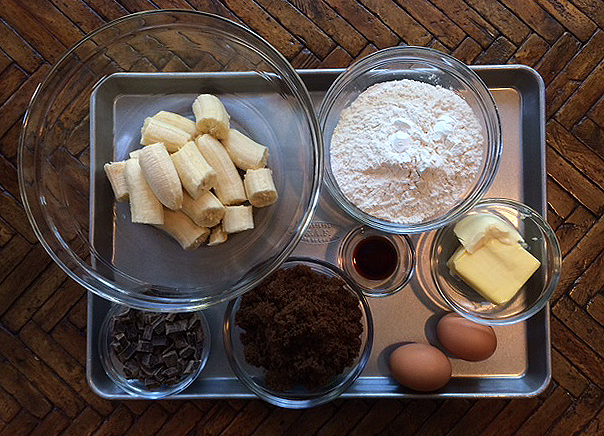 The recipe uses chunks of banana so that you only slightly mash it with a fork. This really helped with the texture, and when you slice the bread/cake you can see the pieces of banana throughout. The book suggests you wait a day or two to eat it, as they believe the cake gets better. It definitely does.

The creator of this recipe is Nigel Slater. He is a food writer, journalist, and broadcaster born and raised in England. He currently writes for The Observer and is the principle writer for the Observer Food Monthly supplement. Nigel has written many books about food – one in particular is Toast: A Story of a Boy’s Hunger, which is autobiographical and details the trials Nigel faced while growing up. It sounds like he really had to struggle and food was his way out.

As for his banana cake, I definitely like the trick of using muscovado sugar and the chunks of banana. This was an easy recipe, and I would make it again for a large group. It is so rich and dense that slicing it thin was the perfect serving for each person. My loaf pan was slightly smaller than what they call for, but I think you could get 12 slices out of it. I would also plan to make it two days before serving – it really did improve the taste. 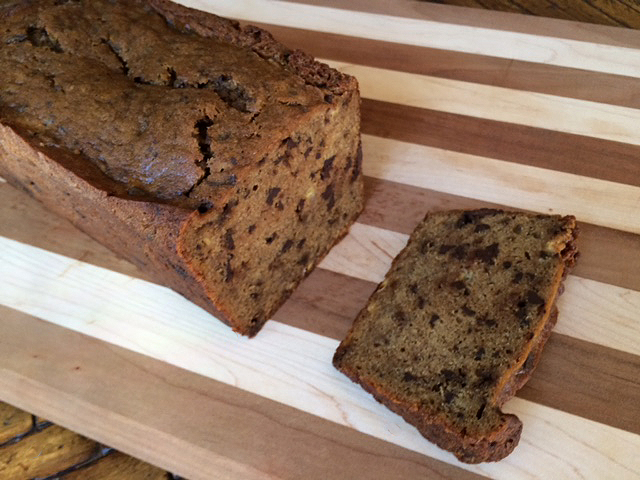 Did this make me a genius in the banana bread/cake department? It is very, very good – but not as good as that warm banana bread served to us when I was 10 in The Palm Court at The Plaza Hotel that night. 50 years later, I am still looking for that perfect recipe. It is so hard to live up to that night and that memory, so my journey continues.

I must have started writing this post a hundred times. Nothing sounded right, nothing felt right. This was procrastination staring me in the face. Taunting me with the possibility of success or failure. Saying to me, “I dare you.” And procrastination was winning. So here goes… I’m standing up for myself and stepping off into this world of genius cooking, book number one.

One of the cookbooks I chose is Food52’s Genius Recipes. The subtitle says “100 Recipes that will change the way you cook.” Let’s hope so, because I could use some help. The book is put together by Kristen Miglore, with a forward by Amanda Hesser and Merrill Stubbs. It is a New York Times bestseller and James Beard Foundation Award-nominated. It promises “to make us rethink the way we cook” and that its recipes are “fool proof.” Yeah, I hope so. The recipes come from major chefs and well-known food bloggers. Chefs like Julia Child, Marcella Hazan with her legendary tomato sauce, cookie extraordinaire Dorie Greenspan, and Rose Levy Beranbaum. The editors also include “genius tips” that promise to share tricks that will make the recipes genius and part of my daily rotation. Hmmmm… Will I become a genius cook??? Well, we will see…

What to tackle first? I wanted to start with the mushroom bourguignon, but didn’t. I bought the groceries for that dish five times, and every time I ended up having to throw them out because I always found something else to do… like pick lemons, do the dishes, straighten up the house, even do the laundry. Ridiculous, right? There it was again – procrastination, fear of failure, lack of confidence.

So what better way to start than with a dessert – one that seemed to be a good stepping off point?

It seemed easy, used lemons, and it is Meyer lemon season – yeahhhhhhhh!!!!! Meyer lemons are my most favorite citrus fruit ever – really ever. A Meyer lemon is sweeter than a regular lemon. It is a mix of a regular lemon and a Mandarin orange. The peel is very, very thin and the skin is smooth. I discovered Meyer lemons last year thanks to a Facebook group called Food In Jars; now, I hoard them by buying the best from Lemon Ladies Orchard and starting to grow my own. I am now the proud owner of five baby Meyer lemons trees in my backyard.

There were two things that were new to me – using agar powder and making a paste out of lemon zest and sugar. Agar powder is used in place of gelatin to thicken the lemon curd, and the paste was used to help the lemon shine throughout the recipe. I liked both and would definitely make the lemon paste again. The agar powder? I would go back to gelatin for thickening. The curd was the perfect consistency after it was taken off the stove, but a day later, after sitting in the refrigerator, it is as hard as a bar of soap. Like you could carve a design in it – just like a bar of soap. Not a happy camper here with deflated visions of eating it for lunch today. When my daughter tried, she said it felt like eating a candle. I am sure I cooked it far too long – I waited for it to thicken on the stove instead of letting it thicken on its own after the cooking was done.

A day later – did it make me a genius? Not yet – but it was one really good attempt and could be successful just by reducing the amount of agar powder used. That and not cooking it longer than the recipe said. Clearly I am not a genius (yet) and I should have followed the recipe better.

The cost: $20.07. It would’ve been worth the money if we had eaten it the day I made it. Having had it sit in the fridge overnight and turn into a waxy candle of a dessert, I might as well have thrown the $20 out the window. The agar powder cost way more than I thought it would — $6.49 on Amazon. You might consider using gelatin from the market instead.

The time: About 30 minutes.